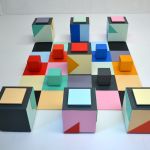 Throughout his career as an artist, mentor and academic, Paul Moncrieff has spent considerable time examining what he sees as the core of contemporary western practice – the formal principles of composition, proportion, rhythm, pattern, colour and systems. He has an ongoing fascination with the De Stijl group of artists who were active in the Netherlands in the early 20th century, and the influence of their graphics, artwork, furniture design and architecture across the world. Gerrit Rietveld’s use of mundane materials and playful yet instructive ideas for furniture and other objects is of particular interest.

Working with geometric and assembled plywood shapes allows me to explore systematic variations on a theme. In fact I would consider my work viewed as a whole, particularly in the last twelve years or so, shows a continuum of development that’s identifiable and interconnected. ‘Your Move’ is a progression from a series of works based on the semaphore, a system of signalling using bi-coloured flags. I’ve evolved my own take and added a whole new layer of colour-coding based on the alphabet. This provides a whole new meaning and ‘Your Move’ becomes a visual board game to be played with and rearranged as desired. PM

Paul Moncrieff lives and works in Kent River near Denmark, WA. With a Master of Arts, Visual Arts (Curtin 1993) and teaching certificates, for many years he combined his art practice with tertiary level teaching. He has an extensive exhibition record and his work is represented in numerous collections in Australia and overseas, including the Art Gallery of WA.