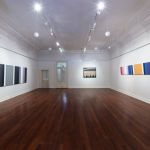 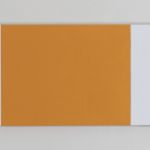 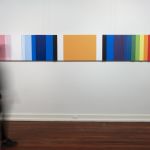 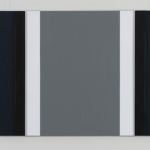 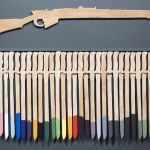 My initial urge to make work about the 100 years of Armistice [the cease of hostilities at the conclusion of WW1] stems from my peripheral interest in the formal accoutrements of military campaigns specifically ribbon bars.

I discovered that all Australian military personnel, at the conclusion of hostilities at the end of WW1, and the resultant Armistice between the conflicting sides, were issued with the 3 Gang Medal Ribbon Bar [and Medals]  denoting their inclusion and attendance in the major theatres of war. So it seemed appropriate to develop an exhibition based around the ribbon bar.

On opposite facing walls of the Vancouver Arts Centre, I will instal 5 metre painted assembled plywood panels. One panel is an interpretative  replica of the Ribbon Bar, the  other, a chromatic reflective shadow work, deeper in hue  - signifying the loss, mourning, memory, sadness and general trauma of the aftermath of war.

The  third work in this commissioned exhibition is a painted panel mounted with a replica timber  .303 Lee Enfield rifle [ the ubiquitous weapon used by all British Empire soldiers in WW1] , together with plywood bayonets dipped into every colour used in the painting of the panels. The bayonets point to the ground, a traditional gesture denoting respect for the fallen.

At the conclusion of  WW1, with over 59 million troops mobilised , a resultant 8 million dead and 29 million injured,  the conflict became known by contemporaries as the Great War. The British author H.G.Wells, coined the term  ‘the war to end all wars’. A hundred years hence, hasn't that proved to be a fine prediction?

Wikipedia states : “An armistice is a formal agreement of warring parties to stop fighting. It is not necessarily the end of a war, since it may constitute only a cessation of hostilities while an attempt is made to negotiate a lasting peace.” The Oxford Dictionary gives as a definition : “a stopping of hostilities by common agreement of the opposing sides: a truce.”

As we now know WW1, termed by contemporaries as the  Great War, the “war to end all wars” [a description coined by UK author H.G.Wells] was nothing of the sort. In fact there are many historians and commentators who maintain there was little cessation of hostilities after 1918, and the conflict rolled on until the renewal of world hostilities in 1939 and the commencement of WW2. Since then we have witnessed countless fields of conflict, horrific acts of violence, violations of border sovereignty and the weighty tomes of politicians inciting nation citizens to give for their country and for the sanctity of the family.

This is not the place for me to develop an essay that catalogues the endless atrocities we have all witnessed over time. I am an artist, and as such I believe I can present questions not necessarily the answers. This installation is my attempt to present the duality of war - the event and its marking [as nation states are wont to do], and the long , often forgotten consequence of the theatre-of-war.