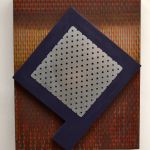 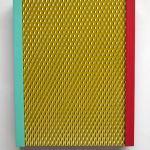 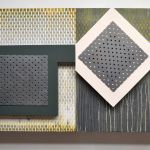 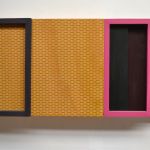 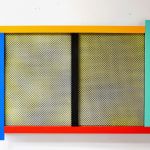 BHPM, a collaboration between Bevan Honey and Paul Moncrieff, has been gently forming for around 3 years. The artists have been exchanging work over this time to bring a new vision to each other’s pieces. Intervening with paint or construction additions over or next to areas worked on by the other, the engagements have been reviewed and modified by the artists at various stages of progress. Despite the kilometres of distance between their studios – from Fremantle to Kentdale – the resulting artworks find common aesthetic ground and a shared mastery of materials.

Over the duration of a friendship communication waxes and wanes, ebbs and flows; its inherent and inevitable that conversation points will come and go and levels of intensity cascade. Over time a friendship, or ‘mateship’ as it’s enshrined in Australian culture, might become stripped back and what is not spoken is often more important then what is. This stripping back of language (a lean use of words) and the causal erosion of unneeded dialogue can paradoxically build more meaning and indeed release often weighty communication with a freed sense of potential. This reminds me of German philosopher Martin Heidegger’s notion of sous rature, usually translated as ‘under erasure’, which for him was the act of crossing out a word within a text but allowing it to still be read - therefore remaining legible under its erasure. This technique was used by French philosopher Jacques Derrida and in a post-structuralist sense often signified a word that was right but wrong/ descript but hollow – something held and yet at the same time freed. The act of erasing, or removing something but allowing that which is removed to remain creates a unique state of tension – a floating, ethereal place of unlimited potential built on crossing paths of (non)meaning. Erasing, stripping language, taking something back or even leaving something unsaid conceptually layers more meaning. In the act of erasure is the understanding that a signifier (a symbol or gesture) can never hold the full potential of its meaning and within this parameter communication becomes sometimes ok, mostly adequate, but often things are left up in the air. Gaps in conversation are full of potential, and often splinter in directions, so too mateships revolve around pauses and erasures; conversations go missing but hang in the ether like words crossed out in a sentence. It’s faith in the potential of these erasures to create meaning and momentum that can build trust, understanding and ultimately affinity.

'At the intersection of art and friendship', Miranda Johnson, Seesaw website

In “BHPM”, Bevan Honey and Paul Moncrieff use their art practices to negotiate the vicissitudes of a long friendship; the challenges of communication and distance as well as its benefits and rewards. Over the past three years, the artists have been exchanging works and intervening with paint or construction additions, overlapping or alongside the original piece. The results are structured objects or assemblages of (variously) acrylic, plywood, spray paint and metal, all which seem remarkably unified and considered – a mark of the ultimate benefits of ongoing negotiation and collaboration. These collaborations are the physical results of a friendship and creative relationship that prioritises change, the unexpected and responsivity.

In both exhibitions, points of connections emerge between and across individual works, creating an interestingly layered showcase of WA artists.